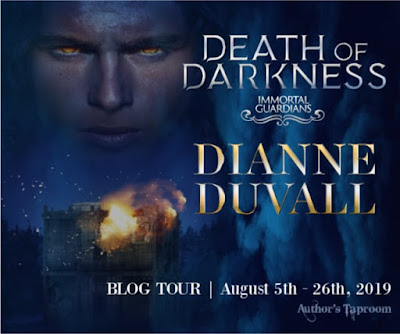 Hello!  Thank you for joining me here at Buffy’s Ramblings. And thank you, Buffy, for letting me visit again! I’m here today to celebrate the up-coming release of DEATH OF DARKNESS, the latest book in my Immortal Guardians series. If you’re new to the series, don’t worry. Each book can be read as a stand-alone novel. You’ll just know more about the secondary characters if you read the books in order. So if you like powerful preternatural heroes who adore strong women, intense action scenes that will keep you flipping pages well past your bedtime, and romance that is alternately steamy, tender and laced with humor, I hope you’ll give the series a try. J

I have loved romance novels ever since I was eleven or twelve years old. I even wrote my first romance novel—a YA historical romance that is still tucked away in a drawer in my office—when I was twelve or thereabouts. There are so many sub-genres of romance that I love, but I don’t read them for the glimpses into past centuries, the thrilling action scenes, or the laughs or tears they inspire. I read them for the romance. I just enjoy “watching” couples find each other and fall in love no matter the circumstances that bring them together.

Whenever someone asks me to name my top five favorite books—or in this instance, my top my favorite book couples—I tend to panic. There are at least two thousand romance novels on the keeper shelves in my office, all of which possess couples I like, and many more romance ebooks on my phone. Choosing just five couples from those is impossible! I can’t even choose my top five favorite couples in my own series. I love them all and wouldn’t want to leave any out. So I decided to narrow it down and focus on only one sub-genre. Below are some favorite book couples who have lingered with me long after I finished reading their books, luring me back for a re-read or re-listen many times.

• Ashlyn and Maddox from Gena Showalter’s The Darkest Night.

• Lachlain and Emmaline from Kresley Cole’s A Hunger Like No Other.

I was so tempted to add a couple dozen more, and could easily do the same for favorite medieval couples, regency couples, sci-fi couples, and more. Who are your top five favorite book couples, and what are your favorite romance sub-genres?

Seth has led the Immortal Guardians for thousands of years. With them fighting by his side, he has protected humans from psychotic vampires, defeated corrupt mercenary armies, defended military bases under attack, and more. But the latest enemy to rise against the Immortal Guardians has proven to be a formidable one, wielding almost as much power as Seth. His goal is simple. He wants to watch the world burn. And he will use every means at his disposal to accomplish it. Seth and his Immortal Guardians have succeeded thus far in staving off Armageddon despite heartbreaking losses. But they have never before faced such danger. Seth has only one wish: to protect his Immortal Guardians family and ensure the continuation of humanity by defeating his foe. But then Leah walks into his life and sparks a new desire.

Leah Somerson has suffered losses of her own. It has taken her a long time to rebuild her life and find some semblance of peace. Then one night a tall, dark, powerful immortal with what appears to be the weight of the world on his shoulders stumbles into her shop, and everything changes. Peace and contentment are no longer enough. Now she wants more. She wants to find happiness. She wants to erase the darkness in Seth’s eyes and replace it with love and laughter. She knows he’s different in ways that make most fear him. Even some of his immortal brethren keep a careful distance. But Leah will not. Nor will she shy away when danger strikes.

Dianne loves all things creative. When she isn't writing, Dianne is active in the independent film industry and has even appeared on-screen, crawling out of a moonlit grave and wielding a machete like some of the vampires she creates in her books.

For the latest news on upcoming releases, contests, and more, please visit DianneDuvall.com. You can also find Dianne online . . .