September 27, 2012
Michel Prince is a writer of romance that spans a few genres. I got a chance to read her YA story, Chrysalis, and the love story really stuck with me and the paranormal world she built was fascinating. She's here today to talk about her work and give us a little insight into her mind. Read on!


Have you always wanted to be an author?
I’ve always wanted to be creative. Although I did write when I was younger and won an award here or there, I’m the furthest thing from an English major. I always enjoyed reading, but when I decided to see where this little idea that had been mulling around in my head wanted to go it poured out of me. I’ve had that happen with only this series and one other book.

What inspired the Chrysalis series?
I don’t want to give all the credit to Twilight, but Stephanie Meyers was giving an interview talking about how she wrote down a dream and kept writing. I’d written a prolog a dozen times when I was bored at work or sitting around. I didn’t know why I wrote it and never wrote past the prolog, but one day I wrote it out again. It’s always the same or similar to the first one I wrote and out came Chrysalis.

Do you have plans on how many books there will be?
Four books have been written. I haven’t decided if I wanted to do more from other character’s perspectives.

You've written more than just this series. Do you have a favorite book, or one you're most proud of?
Yes. I’m serial writer I think. I have an adult paranormal series called The Frozen with book 1 that came out in July. I also have a few other series started.

And I have an adult contemporary one called The Guardian’s Heart that is also being turned into a series. What can I say once I meet my characters and side characters I want to know what happens in their lives.

Chrysalis is my baby but The Guardian’s Heart is one that I’m most proud of for many reasons, technical and story wise.

Do you prefer writing in contemporary, paranormal, or the YA genre, or do all feel equally comfortable to write for?
I’m most comfortable in the adult genre. Whether it’s contemporary or paranormal. The Chrysalis series is YA but it’s a mature YA because it actually started out as an adult book where I “flashed back” to when Oscar and Ellie met. That budding love story turned into it’s own book. That’s why the whole Chrysalis series is considered a cross over series, because it follows them to adulthood and no not to age 18 or 19 but into having a family of their own and fighting these demons while trying to have a career.

Are you a pantser or a plotter?
I’m a plotter that is a pantser. I have ideas of where the book will go, but it always takes on a life of it’s own.

Do you have any advice for other aspiring authors?
You’re going to screw up. A lot. And at the end of the day if your story is good it won’t matter.

When you're not writing, what do you like to read? Who's your favorite author?
I read it all actually. I love historical, thrillers, romance in most genres, paranormal and chick lit.

I love J.R. Ward’s the Black Dagger Brotherhood Series. I love Sherryln Kenyon and she writes so many types I can find anything good with her. My favorite author changes by my mood. If I’m in the mood for a little mystery I love Sidney Sheldon.

Completely unrelated to reading or writing, what’s your favorite activity or way to relax?
I cross stitch.

Name 5 facts about yourself that we may not already know.
I was the head cheerleader in high school for a few years.

I have an unnatural attraction to John Malkovich.

I believe that Tom Baker was THE hand’s down best Dr. Who.-Yes I’m a geek.

I can quote movies lines with the best of them…in fact I have Blazing Saddles-the most quotable movie ever-practically memorized.

I have certificate to coach for football, volleyball and track. 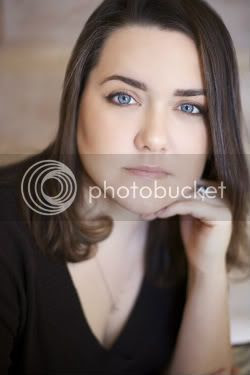 Michel Prince is an author who graduated with a bachelor degree in History and Political Science. Michel writes young adult and adult paranormal romance as well as contemporary romance.

With characters yelling "It's my turn damn it!!!" She tries to explain to them that alas, she can only type a hundred and twenty words a minute and they will have wait their turn. She knows eventually they find their way out of her head and to her fingertips and she looks forward to sharing them with you.

When Michel can suppress the voices in her head she can be found at a scouting event or cheering for her son in a variety of sports. She would like to thank her family for always being in her corner and especially her husband for supporting her every dream and never letting her give up.

Michel is a member of RWA Pro and Midwest Fiction Writers. She lives in the Twin Cities with her husband, son, cat and new puppy.

In the annals of dysfunctional families, the Chisholm’s are working their way to the top. Drug abuse, an unwed mother with multiple fathers, and the questionable cash flow for the 'pretty one'. All this from a seemingly normal, two parent middle class family. But were the choices truly made of their free will?

Bad choices are a Chisholm family trait, one that confounds the youngest child, Ellie, who's trying to separate herself by making smart decisions. And falling for Oscar Jeffreys, the hottest guy at school, would be number one on the list of Chisholm family disasters. Yet the crazy part is it’s not a one sided attraction. Somehow Ellie has caught Oscar Jeffreys’ eye. Sure she could see the barriers between them. Race, age, popularity. They were at opposite ends of the spectrum. But a demon set to destroy her family? She can't see that.

Oscar provides security and acceptance Ellie never imagined she deserved. As the passion of first love grows, Ellie honestly believes she has a chance to beat the odds and live a happy, normal life. Then her world collapses around her. With the help of a guardian angel, Ellie learns of a world that has unknowingly surrounded her for years. And she'll have to find strength buried deep inside to save not only her future, but flush out and stop the demon in her midst.

And Ellie will have to learn that sometimes the hardest lesson about growing up is accepting that you're worth more.

I welcome feedback or even just a random "Hi, how are ya?" so please feel free to email me about anything at all!
REVIEW RATING SCALE